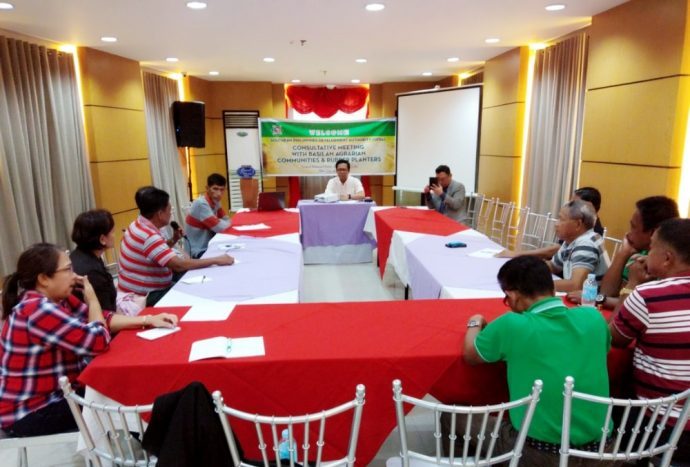 ZAMBOANGA CITY, November 7, 2018 –  Southern Philippines Development Authority  (SPDA) Administrator and Chief Executive Officer Abdulghani ‘Gerry’ A. Salapuddin has urged the government today to save and rescue the rubber industry in Basilan amid the burgeoning problems faced by farmers in this island province.

Salapuddin, together with SPDA Special Envoy for Trade and Investment Datu Farid Adnan Ibrahim, accompanied by Provincial Agrarian Reform Officer (PARO) Hadji Suwaib Ismael, and Immigration Officer Ibrahim Lim, had recently conducted an ocular inspection and visit to many of the agrarian rubber plantations in Basilan which culminated in a consultative meeting with the leaders and representatives of the different agrarian communities of the province.

During the said consultative meeting, SPDA Administrator Salapuddin had unearthed alarming problems that plagued the rubber farmers for several years now as he tried to assess the farmers’ problems, concerns and probable interventions to alleviate their present plight.

Salapuddin identified the leading issues that hound the farmers in Basilan: mismanagement and corruption of the management team; rubber farmers need a bigger and modern processing plant; unstable power supply; low price of rubber products; stranglehold and control of the money lenders and creditors on the indebted agrarian rubber planters; neck-deep indebtedness from money lenders and creditors of most of the agrarian rubber farmers;  pilferages by robbers of rubber products; and low quality of rubber products and bad practices by the individual and private rubber planters.

He also added issues on the poor or lack of managerial skills due to lack of education among the workers-beneficiaries management team; the very bad image of Basilan because of lawlessness created by the extremist and terrorist elements; interference or influence from political leaders in the province; absence of a provincial rubber board to protect and market the rubber products of Basilan; and the absence of a big container port where the rubber products (processed and finished products) can be directly transported to local and foreign markets.

With these issues at hand, SPDA Administrator Salapuddin had requested the DAR-ARMM Provincial Office in Basilan to submit to his office within the week a comprehensive report on the rubber industry situation in Basilan as basis for his recommendation to the office of the President.

Salapuddin opined that the concerned agencies and financial institutions of the government can be directed by the President to take favorable action to save and rescue the rubber industry in this island province.

Salapuddin reiterated that there is a need for the government to construct a big seaport for container vans where ships can dock and transport the rubber products from the province.