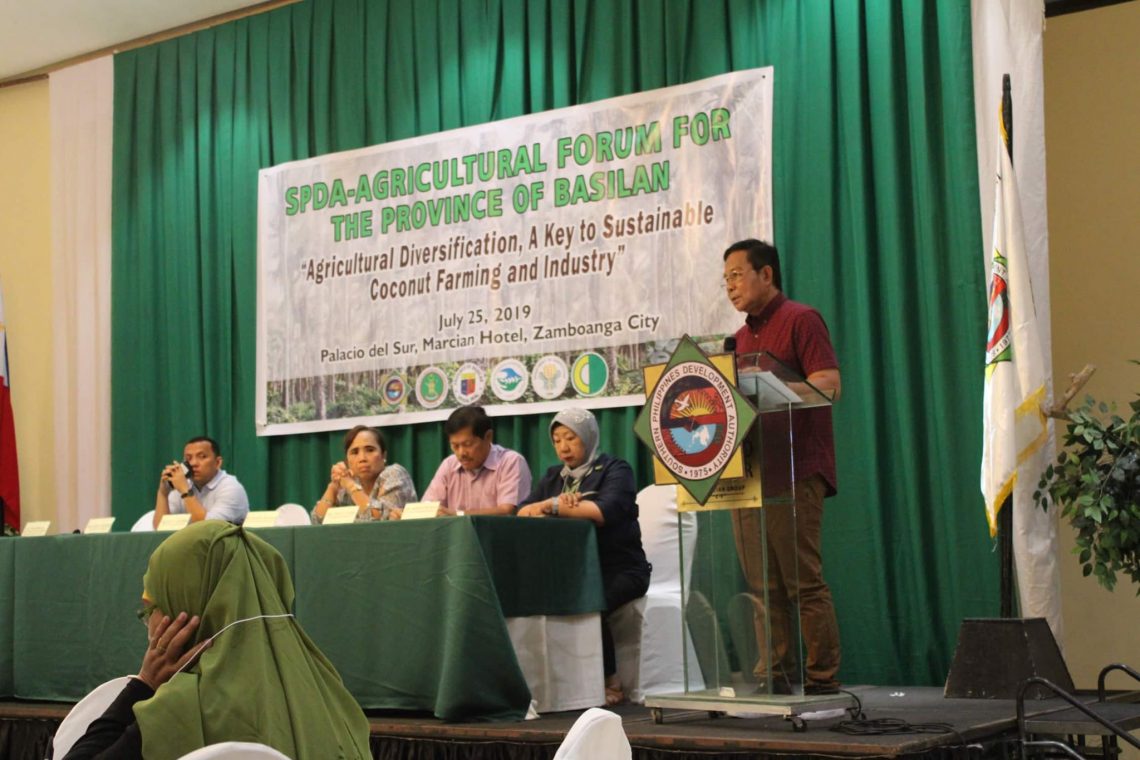 ZAMBONGA CITY (July 25, 2019) – Agitated by the severe devastation of the coconut production and propagation in the Province of Basilan due to the infestation of coconut scale insects (CSI), widely known as ‘cocolisap’ for more than five years now, Southern Philippines Development Authority (SPDA) Administrator and Chief Executive Officer Abdulghani ‘Gerry’ A. Salapuddin has initiated a day-long Agricultural Forum on July 25, 2019, at Palacio del Sur, Marcian Garden Hotel, this city.

Bearing the theme: “Agricultural Diversification, a Key to sustainable Coconut Farming Industry”, the said assembly has been attended by Local Government Units (LGUs);  officials of the Philippine Coconut Authority (PCA); officials from the Department of Agriculture Region 9 (DA-IX) and the Bureau of Plant Industry (BPI-X) based in Cagayan De Oro City.

It can be recalled that losses were mounting in the local coconut industry here as the once among the leading coconut producers in Mindanao has been hardly hit by the infestation of ‘cocolisap’. CSI’s infestation had massively destroyed the coconut trees in the province and the ‘attack’ was visibly manifested by the yellowish color of the leaves of the coconut trees thereby reducing the coconut fruits and gradually killing the trees.

Earlier, it was reported that more than 3 million coconut trees were plagued by coconut scale insects (CSI) in this island province.  Agriculture Secretary Emmanuel ‘Manny’ Piñol had already visited Basilan to personally check the gravity of the infestation in several coconut plantations in the province.

Pinol reportedly said more than half of the total coconut trees in Basilan have been plagued by cocolisap, adding that mitigating measures were discussed during a meeting with the local officials of Basilan and other concerned government agencies to help thousands of affected farmers.

The Philippine Coconut Authority (PCA) had already started their trunk injection activity on the coconut trees while the Department of Agriculture (DA) had focused on root absorption process in a bid to control the proliferation of ‘cocolisap’ in Basilan and other municipalities. However, these efforts proved to be futile due to the insufficiency of budget and the gravity of the ‘cocolisap’ infestation.

During the briefing with the officials and staff of the Authority prior to the conduct of the said forum, SPDA Administrator Abdulghani ‘Gerry’ A. Salapuddin has expressed confidence on the success of this activity, saying this will turn out to be a fruitful one because of the unified efforts among the stakeholders in the region.

“Let’s not be partisan, we have to deal with everybody and let us put SPDA back to the consciousness of the masses”, Salapuddin was quoted as saying. He added, “let’s show them what is SPDA now and what it intends to do in the coming days”.

Salapuddin said that management and leadership are just simply moving around, wandering around and make everybody conscious of what one is doing. “Let’s go around and learn new ideas from the surroundings”, he added.