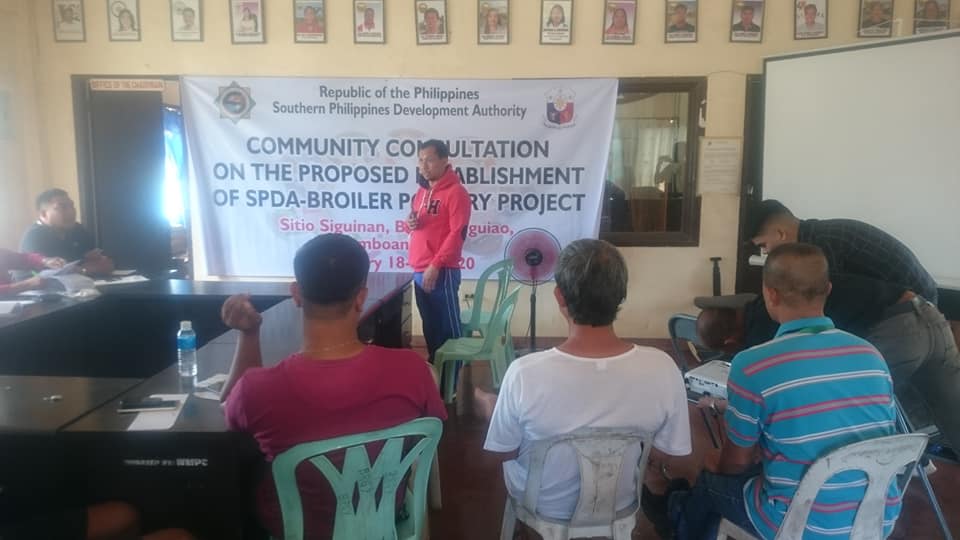 During the meeting with Barangay Chairman Leo Resurreccion and Barangay Council members, Deputy Administrator Munap H. Pacio had given a brief background on the SPDA’s profile and the proposed broiler poultry project in collaboration with San Miguel Foods, Inc. (SMFI).

For their part, SMFI animal productions specialists Elmer Branzuela and Kim Joshua Parchamento, explained that the climate controlled system poultry houses to be established in the area are very different from the conventional ones which regularly emit very foul odor and attract flies.

They said this modern and state of the art system will provide optimal environment for the poultry farming system and further opined that the right climate environment will be beneficial to the growth and wellness of the chickens, thus, paving for reasonable costs for food, water supply, and electricity.

Engineer Sotero Ocariza, Jr. of SPDA, likewise emphasized the economic benefits of the project in the area. He said with the establishment of the poultry project, jobs will be generated for the residents in the barangay while the local government unit will benefit from it through taxes. As soon as the project commences, construction workers will be needed, and another workforce will be required for the security and facility maintenance during the operation, he added. Ocariza assured that SPDA is committed to prioritize hiring workers based from Barangay Bunguiao should the poultry project jumpstarts.

After a lengthy discussion and presentation centered on the proposed project, Barangay Chairman Leo Resurreccion and the Barangay Council members had finally expressed their full support to the joint project after reservations on the various issues such as environmental repercussions surrounding the said project.

After which, the barangay council had finally required the SPDA to conduct community consultation among the residents who are dwelling adjacent to the proposed site of the poultry project. (Celestino B. Siglos, Ed.D.)