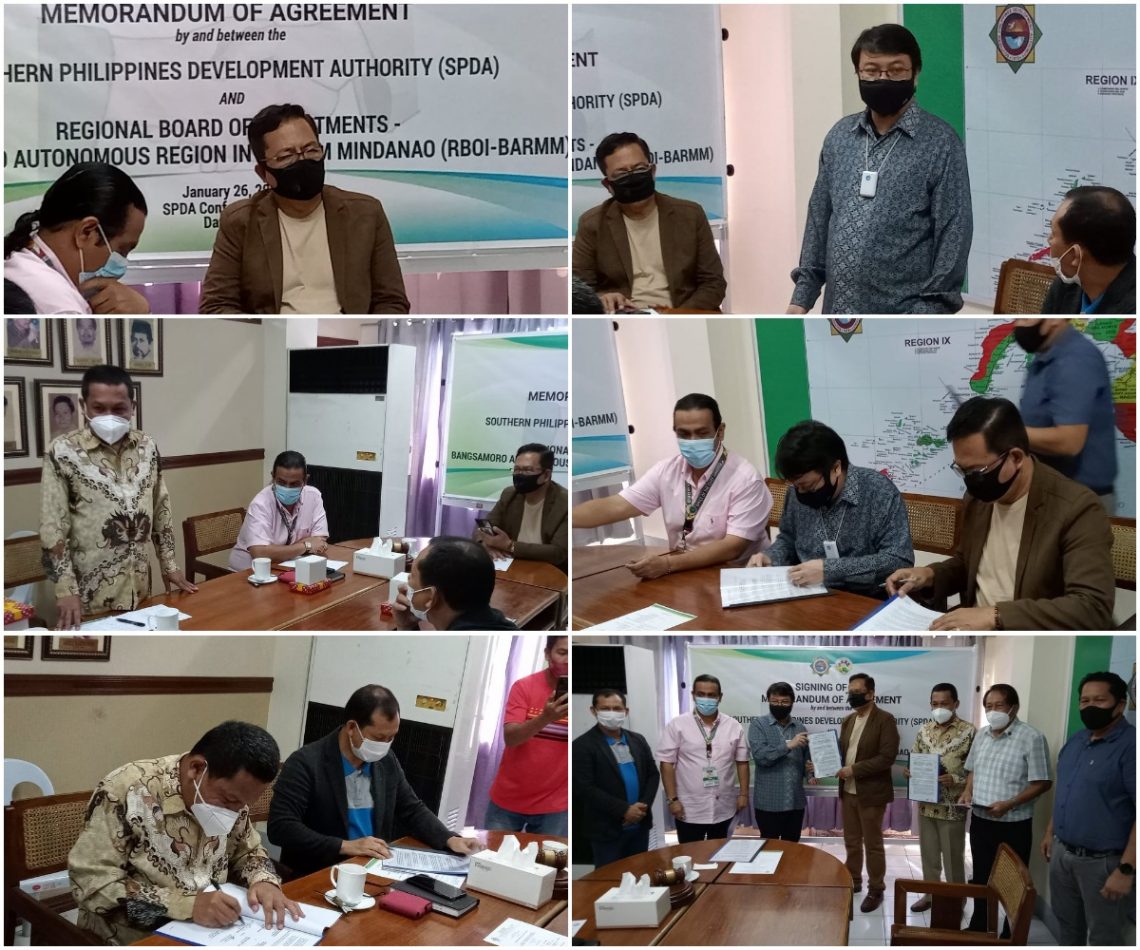 DAVAO CITY (26 January 2022) – Business and investment prospects of Southern Philippines Development Authority (SPDA) are expected to leapfrog into a higher gear this year following the signing of a Memorandum of Agreement (MOA) with the Regional Bangsamoro Board of Investments – Bangsamoro Autonomous Region in Muslim Mindanao (RBBOI-BARMM) Wednesday, January 26, 2022.

SPDA Administrator and Chief Executive Officer Abdulghani ‘Gerry’ Ajul Salapuddin said the MOA signing between the two government entities this year marks another milestone in the history of SPDA for cooperation and partnership in the promotion of business and investments in the autonomous region and in the entire Mindanao. The RBBOI-BARMM delegation was headed by its Chairman Atty. Ishak V. Mastura with members MP Atty. Suharto M. Ambolodto; Board of Governor Datu Mohammad Omar Pasigan; and Mrs. Ambolodto.

Salapuddin disclosed this MOA signals the deepening entry and participation of the autonomous region in the business projects and investments of the Authority in this part of the country. He said no less than R.A. 11054: The BARMM Law stipulated therein the participation of the BARMM in SPDA and the former is also allowed by law to nominate at least on Director to the Board of SPDA to be appointed by the President of the Philippines. In that way, Salapuddin added, the BARMM investments in SPDA are well protected.

In November last year, Southern Philippines Development Authority (SPDA) had launched the very promising Agro-Industrial Development Program (AIDP) in the Municipalities of Wao and Amai Manabilang (formerly Bumbaran) in Lanao del Sur which was believed to have generated a positive domino effect to the Authority. Following the launching of its AIDP, other huge private companies had manifested interest in locating into the proposed Mindanao Special Economic Zone (MinSEZ) in Wao and Amai Manabilang Municipalities in Lanao del Sur.

As a Government-owned and Controlled Corporation (GOCC), Salapuddin said SPDA can go into any kind of business projects and investments in Mindanao and even in the entire country and anywhere else in the ASEAN region for as long as it is pursuant to its broad mandates beneficial for the Philippines. Salapuddin opined it only takes one successful big step to trigger business interests from the potential investors in Mindanao. (Celestino B. Siglos, Ed.D.)