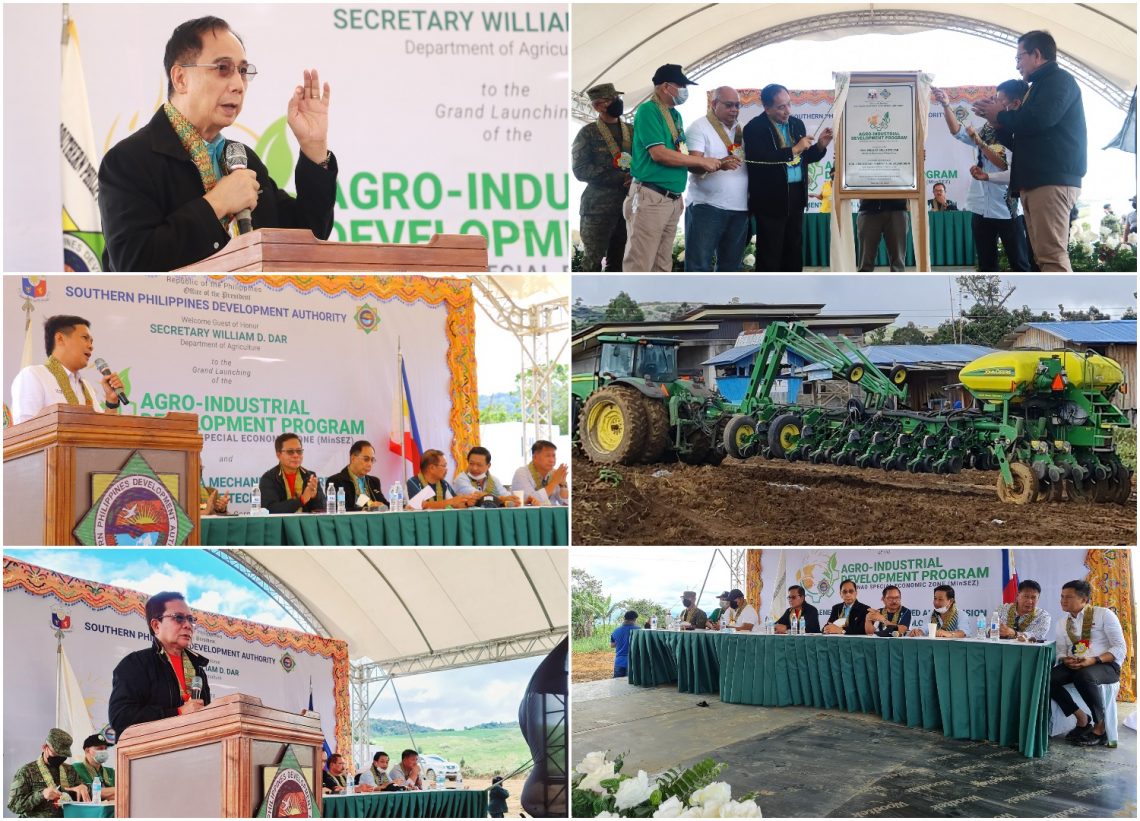 AFMA is the Philippine Government’s policy instrument that defines measures to modernize the country’s agriculture in order to be at par with the leading nations in the global market. Agriculture Secretary Dr. William Dollente Dar was the AIDP launching keynote speaker who represented President Rodrigo Roa Duterte as the latter had another prior commitments. Dar discussed the current condition of the Philippine agriculture before the Bangsamoro Autonomous Region in Muslim Mindanao (BARMM) Ministers, local officials, SPDA’s private business partners, and local farmers.

“The use of modern technology can spur or accelerate the development of agriculture in the country”, Secretary Dar was quoted as saying during his speech.  The revised concept of development of the 26,000 hectare proclaimed property in the Municipalities of Wao and Amai Manabilang upon the reactivation of SPDA has been focused on the establishment of a special economic zone dubbed as MinSEZ or Mindanao Special Economic Zone.

In his message, SPDA Administrator and Chief Executive Officer Abdulghani ‘Gerry’ Ajul Salapuddin disclosed that in the entire Mindanao, there is only one economic zone located in Zamboanga City and that he wanted President Rodrigo Roa Duterte to officially declare MinSEZ as an economic zone in Mindanao.

However, due to certain constraints, the effort in converting the area into an ‘ecozone’ was stalled. Despite this temporary setback, however, the spirit to continue with the concept of the plan was sustained. The development planning had been pursued simultaneously with the marketing of the area wherein prospective locators were invited to infuse sufficient financial resources for agricultural development.

The direction was to fulfill the mandate of SPDA in accordance with Presidential Proclamation No. 2046, to continue to manage and supervise the area with development concepts grounded on the current socio-political, cultural and economic condition prevailing in the area. Hence, an Agro-Industrial Development Program (AIDP) was adopted in pursuance to the envisioned revised concept of developing the area.

“Despite the meager funds of the Authority and at no expense on the part of the government, through creativity and linkages and by the grace of Allah, we managed to persuade an American company, the Asia Pacific Precision Agriculture Group (ASPAC AG) with its local affiliate, Lanao del Sur Corn Development Corporation (LDSCDC) to become our partner in implementing this precision agricultural engineering within the 26,000 hectares of SPDA proclaimed property in the Municipalities of Wao and Amai Manabilang, Lanao del Sur,” Salapuddin said in a statement.

Salapuddin had expressed his esteem appreciation to the local executives of both Amai Manabilang and Wao Municipalities for their open and supportive help in making this dream come true as these areas are within their jurisdiction. He added, “we came to them as their partner for peace and development and we ended up earning their trust”.  This is a modern agriculture venture of large scale using precision agri engineering and the SPDA Administrator was hopeful that this can be replicated in the other provinces not only in the Bangsamoro Autonomous Region in Muslim Mindanao (BARMM) but in the entire Mindanao island.

Salapuddin said there are wide tracts of idle but arable lands in Mindanao that can support the government’s food self-sufficiency program and export its surplus agricultural production to earn US Dollars and strengthen Philippine economy. Since the last 40 years of SPDA’s existence in Mindanao, Salapuddin disclosed that there had been no foreign multinational company that ever invested within the Lanao del Sur proclaimed property of the Authority, it’s only this time. (Celestino B. Siglos, Ed.D.)